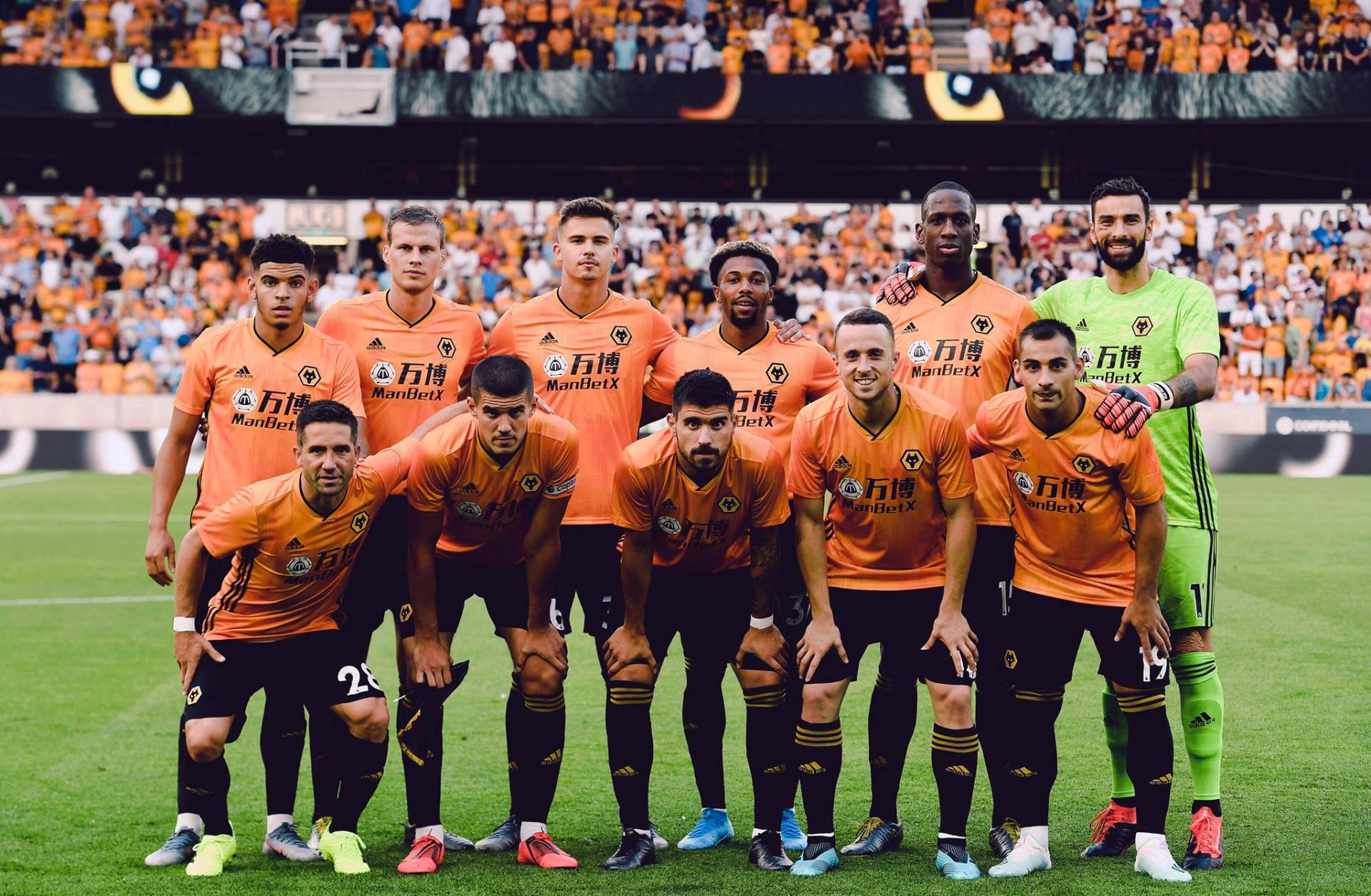 We present our opponent: Wolverhampton

In this round our team will face English Wolverhampton which is one of the strongest teams confronted Pyunik in the Euro Cups.

The English team which performs in the Euro Cups for the first time after a 39-year break has managed to win Northern Ireland’s Crusaders in both legs of the second qualifying round (2-0, 4-1).

In general, Pyunik will face a team representing top 5 European Championships for the first time in the Euro Cups.

Wolverhampton is one of the ancient clubs of England which is also one of the founders of the English Football League. The team in England as well as abroad is more known as Wolves. The club founded in 1877 by pupils of St Luke’s Church School John Baynton and John Brodie was initially called in honor of Church School St Luke’s. 2 years later it merged with local club Wanderers and in 1879 was named Wolverhampton Wanderers.

In 1893 Wolverhampton won its first prize defeating Everton in the FA Cup final.

Wolves’s most successful period was after the Second World War, in 1950s when the team was trained by Stan Cullis. During his coaching Wolverhampton became three-time England champion (1953/54, 1957/58, 1958/59) as well as won the FA Cup and FA Charity Shield. Billy Wright was the team’s star of that period who spent his whole career in Wolverhampton playing 490 matches in the championship. Forward Jimmy Mullen was team’s another legend who also played only for Wolverhampton throughout his whole career and became an author of 112 goals in 486 matches.

In 1954 when Wolverhampton won friendlies with Hungarian Honved (3-2) and Spartak of USSR (4-0) the English media proclaimed the team “Champions of the World”.

The serious financial problems in the early 1980's led to the team’s recession as a result of which the club retreated to the Fourth Division. The new sponsors helped to stabilize the situation and the team’s new head coach, Graham Taylor promoted the team back to the First Division.

The breakthrough in the club's most recent history was in 2003 when in the play-off final to the Premier League Wolves led by Dave Jones defeated 3-0 Sheffield United and after a 19-year break returned to the English Premier League.

Wolverhampton’s best footballer is forward Steve Bull who is also the club’s top scorer of all times. From 1986 to 1999 he scored 306 goals with Wolves.

There are many legionaries in Wolverhampton, mostly Portuguese players. Among them goalkeeper Rui Patrício and midfielder João Moutinho are members of the Portugal national team and have become Euro 2016 winners with it. This won’t be the first time these footballers are visiting Armenia, in July 2015 they competed with the Armenia national team at Republican Stadium.

According to the results of the previous season Moutinho was named the best Wolverhampton footballer of the season.

The best scorer of the previous Premier League in Wolverhampton was named Mexican Raúl Jiménez who scored 13 goals. 26-year-old defender Conor Coady is the captain of the team.

During the summer transfer window Wolves’s greatest achievement became 21-year-old Italian forward Patrick Cutrone who has played for Milan and has performed with Rossoneri in the last three seasons of Serie A scoring 13 goals in 63 matches.

22-year-old defender Jesús Vallejo will play for the team on loan the transfer rights of who belong to Real Madrid. Last season the Spanish was included in the royal team lineup and spent 5 matches in La Liga scoring one goal.

These days Portuguese Braga footballers Pedro Neto and Bruno Jordão have also joined the team. The footballers have spent the last two seasons playing for Lazio Roma on loan.

According to Tansfermarkt website the entire staff of Wolverhampton is estimated 313, 90 million euros.

45-year-old Portuguese Nuno Espírito Santo is the team’s head coach. In the past he was a goalkeeper and played for Portuguese Vitória de Guimarães, Porto, Aves, Spanish Deportivo La Coruña, Mérida and Osasuna. During 2005/06 season he played for Dynamo Moscow.

In particular, in 2005 Nuno Santo and former goalkeeper of the Armenia national team Roman Berezovski competed for the Dynamo goalkeeper position but when Brazilian Ivo Wortmann took the helms of the team at the middle of the season the goal post was trusted only to the Portuguese.

Nuno Espírito Santo became a Champions League (2003/04) and UEFA Cup (2002/03) winner in Porto although he was a reserve goalkeeper as then Vítor Baía was Porto’s number one player.

In 2010 after his retirement he worked in Málaga FC and Panathinaikos FC as a goalkeeping coach.

In May 2012 he was appointed for the first time as a head coach in Portuguese Rio Ave. Working in the team for two seasons Nuno Espírito Santo managed to take it to the Europa League for the first time in the history of the team.

In July 2014 he signed a one-year contract with Spanish Valencia. At the beginning of the following year the contract was extended. In his first season Nuno Santo placed 4th with Valencia and three times was named La Liga Manager of the Month. However on November 29, 2015 he resigned after a match against Sevilla.

The following year the Portuguese returned to homeland and signed a two-year contract with Porto but at the end of the season was relieved of his duties.

On May 2017 Nuno Santo signed a three-year contract with English Wolverhampton. Under his leadership Wolves took the first place in the English Championship and qualified for the Premier League after a six-year break.

In September 2018 Nuno Espírito Santo was named Premier League Manager of the Month when his team remained invincible during four matches scoring 10 points. It was the first time when a Wolverhampton manager was awarded such a title.

On May 4 2019 Nuno Espírito Santo was awarded an Honorary Doctorate in Sport by the University of Wolverhampton.

Wolverhampton spends its home matches at Molineux Stadium which was built in 1889. It has a long history and was the first stadium of the English Football League. It was one of the first British grounds to have floodlights.

The Molineux name originates from Benjamin Molineux, a successful local merchant who in 1744 purchased land on which he built Molineux House which was later converted to the Molineux Hotel. The stadium was built in that same area.

In the early 1990s after a multi-million pound renovation Molineux became one of the biggest and most modern stadiums in England.

Despite its rich history, Wolverhampton is participating in the Euro Cups only for the eighth time.

In 1972 the club had its most successful season in the Euro Cups when Wolves led by Bill McGarry reached the UEFA Cup final.

Before it Wolverhampton had left behind Juventus and Hungarian Ferencvárosi but in the final consisted of two legs Wolves competed with another English team Tottenham.

Wolverhampton conceded the first leg at home, 1-2 and the second leg ended in a draw, 1-1, that time the luck was on Tottenham’s side.

Last time Wolverhampton participated in the Eurocups in the season 1980/81 where after two legs of the first qualifying round conceded to Dutch PSV Eindhoven (1–0, 1–3).