One of the best scorers in the history of our team Arman Karamyan and his brother Artavazd Karamyan were the undisputed leaders of Pyunik in the early 2000s. The 2002 season was one of the best in Arman Karamyan's career. Playing for Pyunik he became the best scorer of the championship with 36 goals scored and at the end of the year was named the best player of Armenia. This was the last season of the Karamyans in Pyunik after which they moved to the Greek Panachaiki.

Pyunik’s press service contacted Arman Karamyan to ask his opinion about the future opponent of our team, as well as to recall Pyunik's brilliant victory over Tampere United in the Champions League qualifying round 20 years ago.

- First of all, how are you? We know that you coached the youth team of the Concordia FC in Romania.

- We have been living in the USA for 2 years. A few days ago I received an offer from the newly formed Armenian club Brave Lions from California to join the coaching staff of the team. The team has already played 6 matches, having 4 wins and 2 losses. My eldest son, Suren, plays for this team and my middle son plays in  the LA Galaxy youth team. I must say that we have already reached an agreement with the Football Federation of Armenia to invite my sons to participate in the control matches of the Armenia U17 and U19 national teams in August or September. This is our desire. Suren has just turned 18 and can play in the Armenia youth team. He is a good player. A few years ago, he played for the Romania U15 national team, scoring 1 goal in 3 matches. My youngest son and my brother Artyom’s son (Artavazd Karamyan) were born in 2008 and also play football.

- You probably know that as a result of the draw in the first qualifying round of the Champions League Pyunik will face the Romanian champion Cluj. You played in Romania for many years, you are well acquainted with the football of this country. What can you say about Cluj?

- Cluj is a really good team and it is no coincidence that this year they became the  champion of  Romania for the 5th time in a row. The team is headed by one of the most famous former players of Romanian football, Dan Petrescu, who played successfully for many years in Chelsea, London. He is a good specialist, and it was during his stay when the club won various titles. I know there are several high-level foreign players in Cluj. Besides them, there are some Romanian players who also play well. I can say that Cluj is a strong rival and Pyunik has very difficult matches ahead. To be honest, I would prefer Pyunik got another opponent.

-If you remember 4 years ago Cluj competed with Alashkert Yerevan in the Europa League and won both matches (2-0, 5-0). If you draw parallels, when  Cluj was stronger, then or now?

- In my opinion, the current team is stronger. Cluj has improved its play, in addition, the team has replenished with good players. It's no secret that all teams are growing. In the same way, I can say that the current Pyunik, in my opinion, is stronger than the Alashkert of that period.

-At present Pyunik is headed by your colleague in the Armenia national team, Yeghishe Melikyan, who after a long break led Pyunik to the champion title of the Armenian championship for the 15th time. Do you keep in touch with him?

- Of course. Yegishe is my friend and we have always kept in touch with him. We have already congratulated him on winning the title of Armenian champion. Moreover, my brother Artyom talked to Yeghishe a few rounds before the end of the championship and said that Pyunik would become the champion. We are very happy, firstly, for our friend Yeghishe, and secondly, for Pyunik, which was the main club of our career.

- In a month, it will turn 20 years since the historic Champions League match against Finnish Tampere United, where Pyunik won the away match, 4:0, impressively and where you scored two and your brother one goal. What are your memories of that memorable match?

- To tell the truth, I still shiver remembering those moments. Many people didn’t believe that we could win that match but our Armenian spirit and desire to play high-level football played a big role. We were especially impressed by the support of our fans during the second leg. Unfortunately, after the matches against Tampere United and Dynamo Kyiv in the next round, I continued to play in our national team for many years, but our stadium was never as crowded as it was then. I'm really sorry. 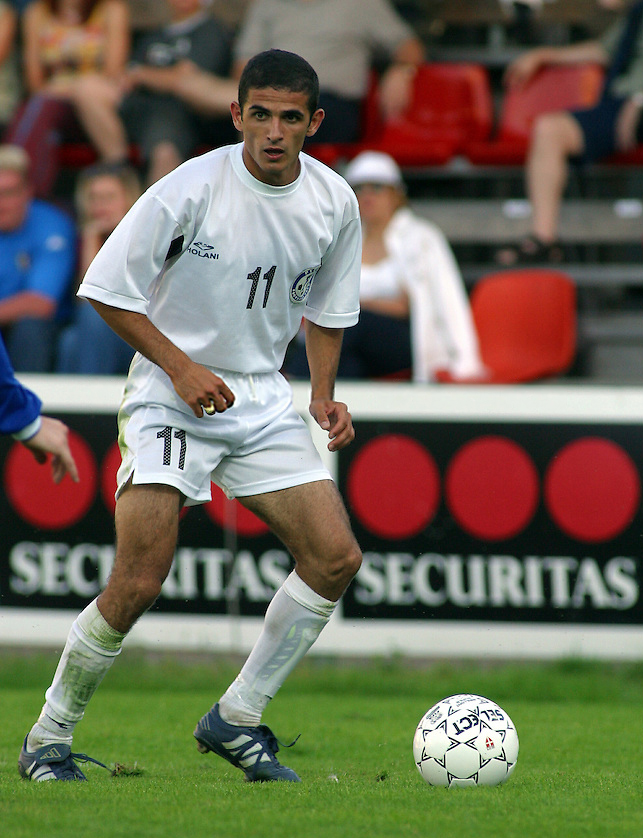 Pyunik's forward Arman Karamyan in the match against Tampere United, 2002․

Yes, 20 years have passed, and looking back, I must say that after that match our football should have developed even more. At that time, we had a good team with such players as Varazdat Avetisyan, Artr Mkrtchyan, Vardan Minasyan and goalkeeper Andranik Kharagyozyan. Our coach, Argentinian Oscar Lopez, was also good. After all this, we wanted Armenian football to move ahead. But alas...

We have quite talented players, but both then and now, I believe that the best players in our championship should continue their careers abroad.

I would like to touch on another very important topic. I would very much like to see more Armenian than foreign players in the Armenian championship. For example, when we played in Romania, we were on a limited list of foreigners, and they could have a maximum of 3-5 foreigners in the team, two of which were me and Artyom. But today, when you look at the teams of our championship, there are more legionnaires in the starting lineup than Armenian players. That’s why we face the problem of finding new players for our teams. We have many talented children.

- And finally, what would you wish to all fans of Pyunik, especially the representatives of the middle and older generation, who rooted for you and your brother during the years of your performances?

- I cordially greet all Pyunik fans, both today’s and those who rooted for us then, especially our devoted fan Vardan (better known as Brasilia). Everyone. We are grateful to the fans who still remember us, we respect and love them too. Here we also meet many people who remember us. Even a few days ago we attended an event, and the presenter recognized us, and I swear, he said that there was a time when the most popular players of Pyunik and the Armenia national team were Arman and Artavazd Karamyans. Once again, I would like to greet everyone cordially. We hope that our sons will follow our way.

Taking this opportunity, I wish Pyunik victory. We are beside Yeghishe Melikyan, and we will keep in touch with him, and if necessary, we will help him in any way we can. Most importantly, this time let it be the same result as in the match with Tampere United 20 years ago and let the players give the fans a brilliant victory.