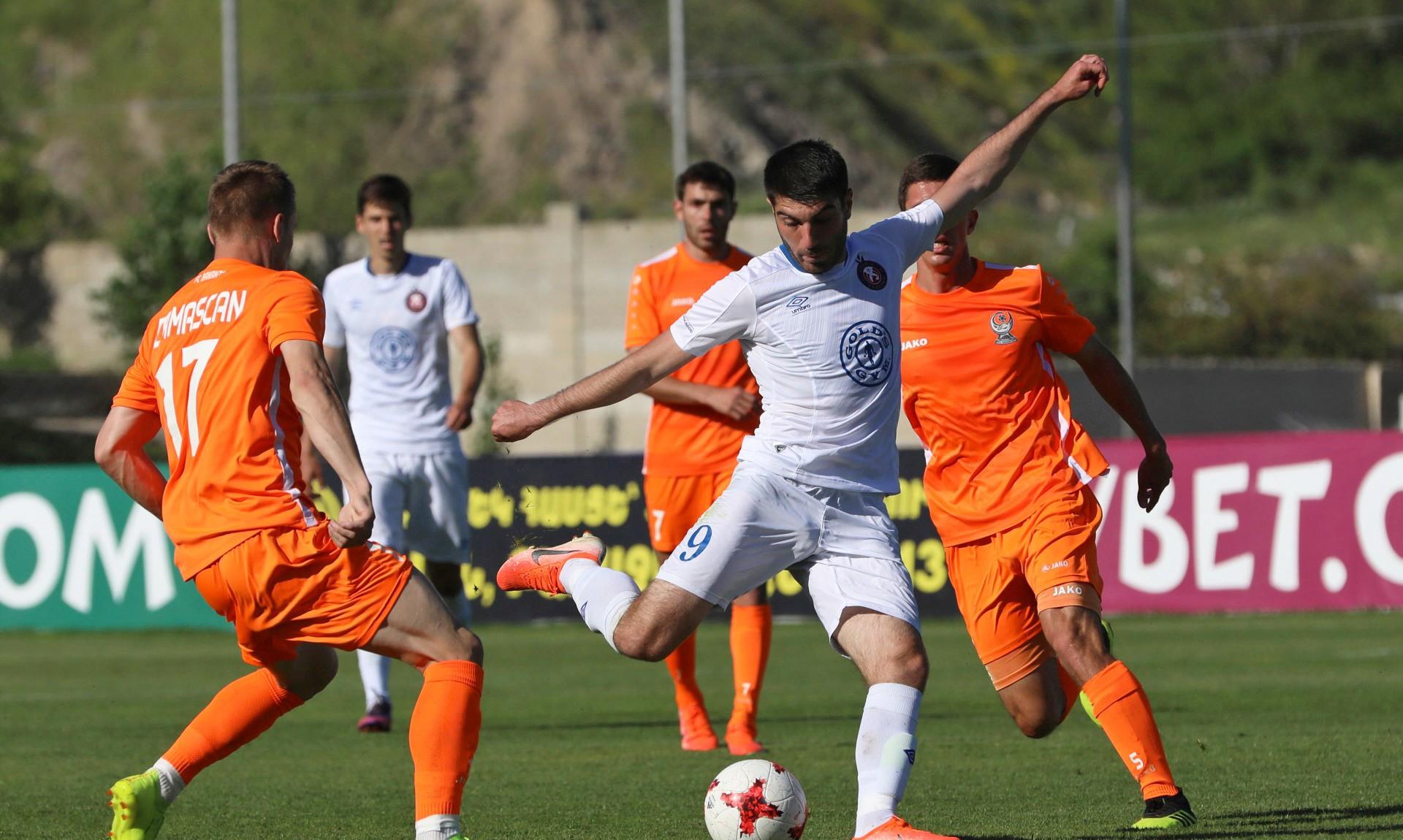 In the central match of the 33rd day of the Armenian Premier League Pyunik hosted Banants.

The match was of a great importance for both teams. In case of a victory Pyunik would increase the deference of the points with the nearest followers and would get closer to the champion title.

Compared to the previous match, Armen Manucharyan and Usman Mohamed who had missed the previous match appeared in the starting lineup of our team. Moreover, Aleksandr Tarkhanov sent to the pitch the same lineup which several days ago on the same pitch had had a brilliant victory over Ararat-Armenia, 4-1.

Already on the 6th minute of the match Arthur Miranyan had a perfect chance to move ahead Pyunik when after Sergei Shevchuk’s accurate pass he failed to fulfill the header correctly.

On the 19th minute Banants got a right for a free kick and Ilya Damashkan sent the ball to our team’s penalty area but Aram Bareghamyan lacked a second for a kick.

On the 20th minute Denis Talalay tried to address smoothly the ball to Sergei Shevchuk from Banants’s penalty area but the opponent’s defender was able to reach the ball first and throw it out to the corner.

On the 22nd minute after Ilya Damashkan’s lateral pass from the right wing Banants’s two footballers appeared in our penalty area, luckily, failed to get the ball.

Pyunik’s Erik Vardanyan and Arthur Miranyan threatened twice to Banants goal with long-range kicks but in both cases the ball flew high.

On the 36th minute Hakob Hakobyan moved ahead from the right wing and approaching to our team’s goal post tried to conquer the farthest corner but his shot was a little skew.

The first half was poor of goal moments and the goalkeepers of both teams remained uninvolved in the game.

After the interval the image changed dramatically and at the very beginning of the second half our team managed to open the score. After Kristi Marku’s long-range pass Robert Darbinyan hit the ball clumsily and it went to Arthur Miranyan who bypassing Aram Hayrapetyan conquered the goal easily, 1-0.

After the scored goal our team had a good chance to double the score but Usman’s free kick was high.

It seemed Pyunik succeeded in the match but on the 55th minute Banants managed to equalize the score. In our team’s penalty area Karen Melkonyan masterly bypassed first Kristi Marcu  and then Maksim Zhestokov and made the score 1-1 with an unstoppable shot.

However, after the conceded goal Pyunik could still be the winner of the match when Erik Vardanyan was the first to react to Armen Manucharyan’s pass and after a close-range header  the ball passed by the goal post and went out of the pitch.

It should be noted that this time our team failed standard playing positions which had become the trump card of our team in the previous matches.

Already on the 80th minute Banants could advance in the score when Igor Stanoevich coming closer to our penalty area from the left wing kicked to the farther corner but the shot wasn’t accurate.

5 minutes before the end of the match Pyunik gained a quantitative advantage when Robert Darbinyan was removed of the pitch for the second warning.

But the score remained unchanged during the left period and ended in a draw, 1-1.

After the match Pyunik earned 56 points and continues leading the tournament table surpassing by 4 points 2nd place runner Ararat-Armenia who still has one more match to play.