15 facts you should know about Yeghishe Melikyan

1. Yeghishe Melikyan made his first football steps at the Republican Football Sports School (now Urartu Training Centre). Having a strong desire to become a football player from a young age, at 10 years old he attended the Malatia Football School, which was close to his home.

2. Yeghishe Melikyan's first professional club was newly created Yerevan, where he made his debut in 1995 in the Armenian Premier League. However, the severe injury he had received and several operations could put an end to Melikyan’s career, who had just started it, and as a result of it he had a break for 2 years. 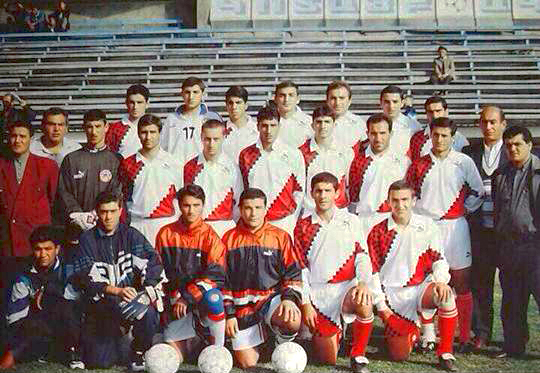 3. Recovering from the severe injury, Melikyan played for Dvin Artashat where he qualified for the Armenian Premier League in the 1996/97 season.

4. On October 28, 1998 Yeghishe Melikyan scored his first goal in the Armenian Premier League for Dvin, sending a ball to Karabakh’s goal post in the match for the 7-9 places of the championship. 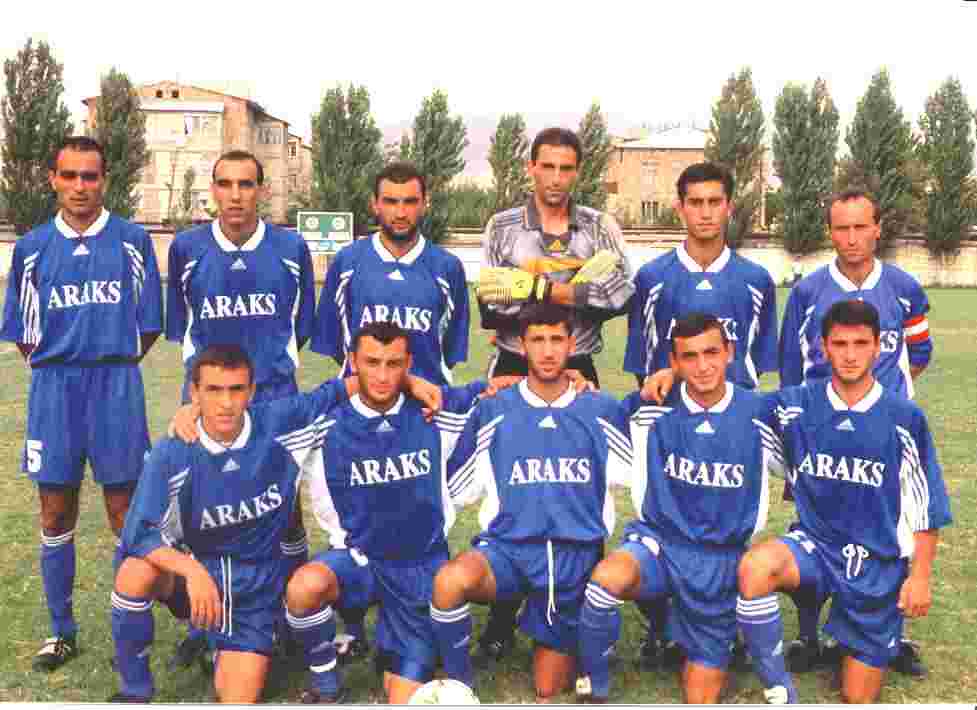 5. After the end of the first season of the 1999 championship, he joined the ranks of the Armenia’s champion Tsement, then continued performing in renamed Araks. In season 2001-02 and 2007-08 Yeghishe Melikyan played for Banants Yerevan, being its captain, and in the 2009-10 season he played for Ulysses Yerevan for some time.

In the Armenian Premier League, he played 164 matches and scored 15 goals. 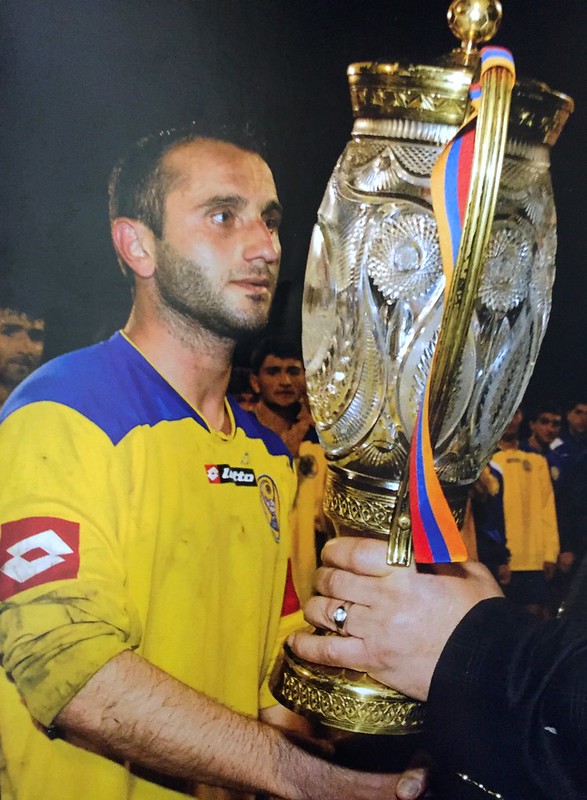 Yeghishe Melikyan with the Armenian Cup (2007)

In 2002 Yeghishe Melikyan shared the 7th-8th places with Aram Hakobyan in the Best Player of the Year Award, as well as was included in the symbolic team of the 2002 Armenian championship. 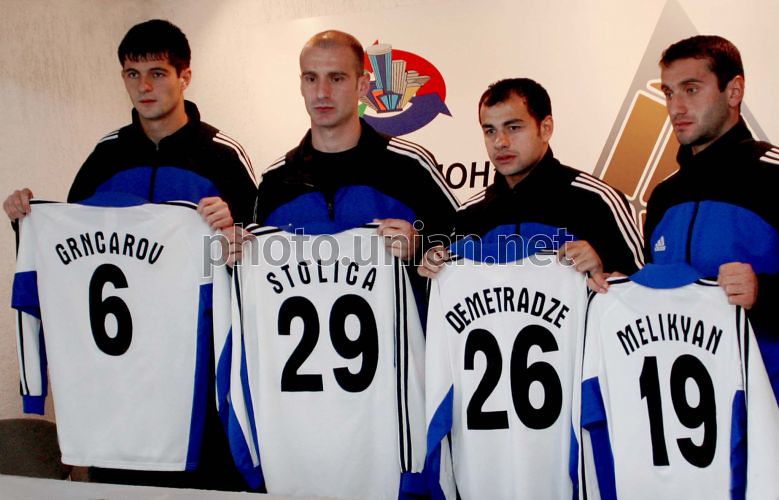 7. In February 2003, Melikyan signed a 3-year contract with Metalurh Donetsk, whiere he became a bronze medalist of the Ukrainian championship in the 2002/03 and 2004/05 seasons. Melikyan played for the Donetsk team until the summer of 2006, then he played on loan for Stal Alchevsk half a season. He also performed in Zorya Luhansk  (2009), Krimteplitsa (2010) and Hoverla Uzhhorod (2011-12). 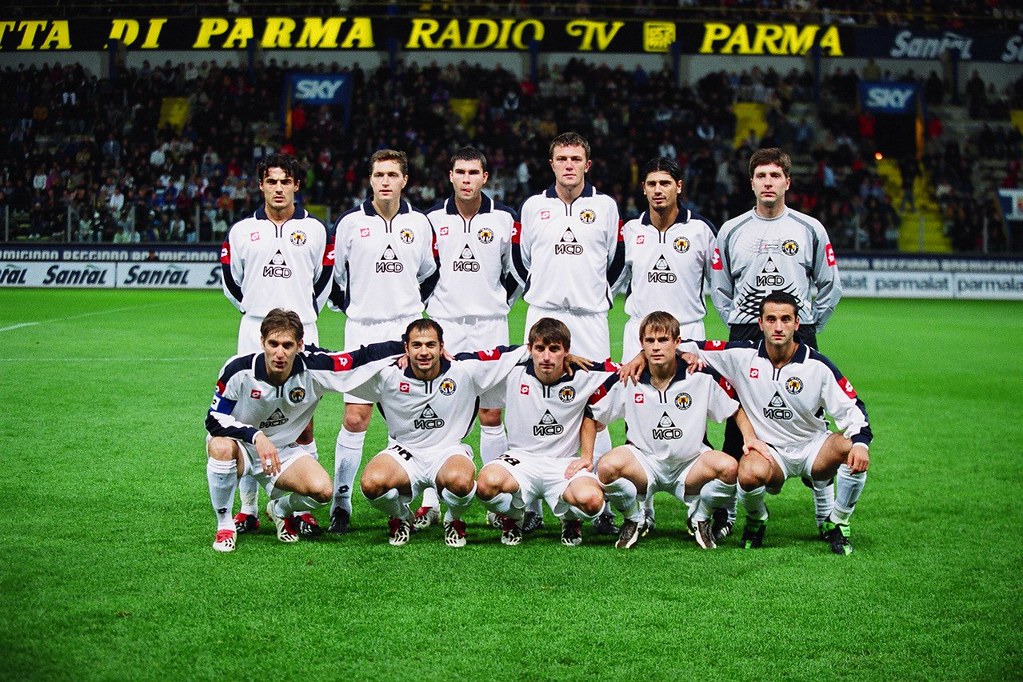 8. Melikyan scored his first goal in the Ukrainian Premier League on June 10, 2004, in the 28th day of the championship, playing for Metalurh Donetsk against Volyn Lutsk. 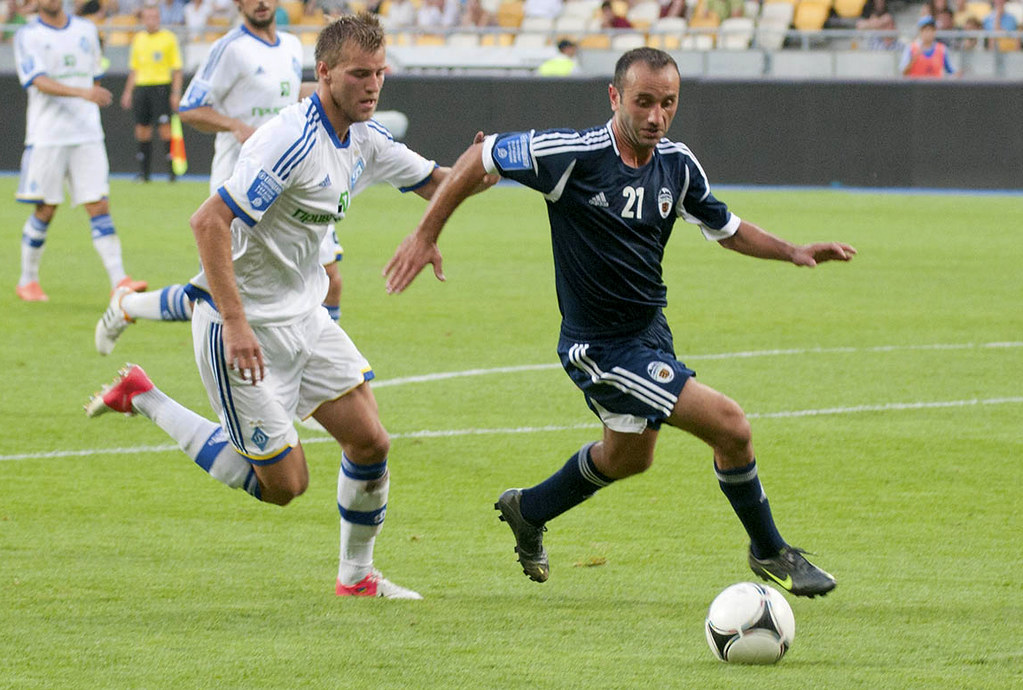 In that index, he places 4rd among Armenian players who have performed in the championships of the Ukrainian Premier League, yielding only to Armen Hakobyan (211 matches), Henrikh Mkhitaryan (109 matches) and Gegham Kadimyan (95 matches).

Nevertheless, in Metalurh Donetsk which had the most number of Armenian players among the Ukrainian teams, Melikyan yielded only to Gevorg Ghazaryan (59 matches) with the matches played in the local championship.

10. Although Yeghishe Melikyan stood out 4 times in the Ukrainian Premier League, two of those goals were recognized as the best goals of the day by different versions.

On October 1, 2006, in the 9th day of the Ukrainian championship, Yeghishe Melikyan, playing for Stal Alchevsk, scored a long-range goal against Shakhtar Donetsk in the 81st minute, becoming the only goal scorer of the team (1:3). That goal was named the most beautiful goal of the day by the Ukrainian TV program Gol and was also included  in the list of four candidates for the best goal nomination of September by the same TV program.

And on August 11, 2012, Yeghishe Melikyan, playing for Hoverla Uzhhorod, surprised the goalkeeper of Dnipro Dnipropetrovsk, Yan Lashtuvka, with a penalty kick in the 54th minute. The goal he scored was named the best goal of the 5th day in а poll conducted the Ukrainian UA-Football website.

11. The interesting thing is that during his performance in Armenia Melikyan twice managed to score a goal against Pyunik. 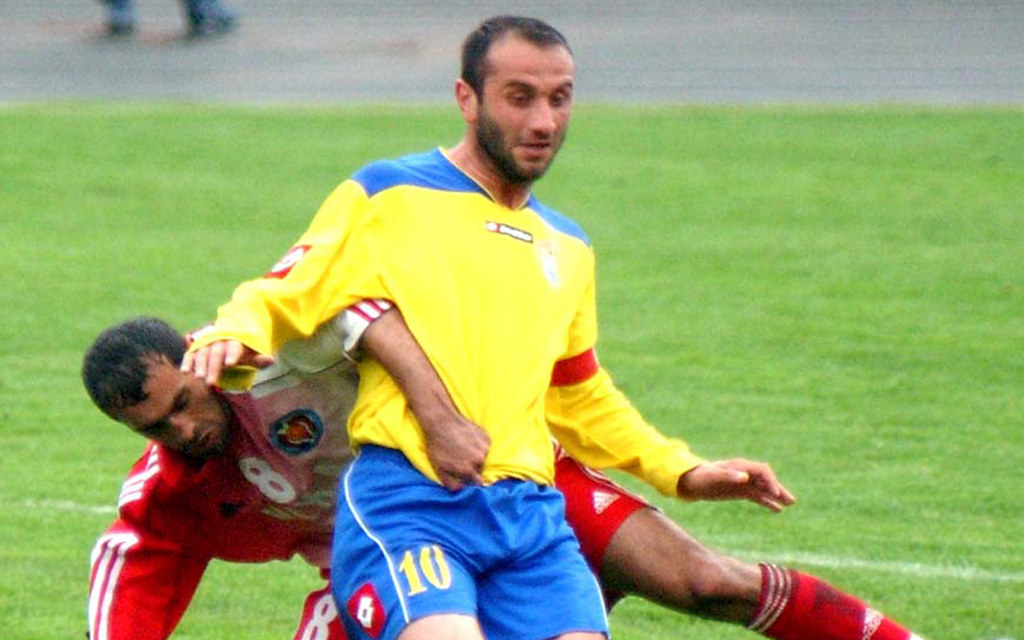 On April 13, 2002, in the first matchday between Pyunik and Banants (3-1) of the Armenian Premier League, Banants captain Yeghishe Melikyan sent a ball to Russian goalkeeper Ruslan Lyashchuk’s goal post in the 75th minute.

And 5 years later, on June 14, 2007, in the 9th matchday of the Armenian Premier League between Pyunik and Banants (5-1), Melikyan, who was again the captain of Banants, hit hard from a distance in the 11th minute, sending a beautiful goal to the goal post guarded by Pyunik's Cameroonian goalkeeper Giofak Miller. 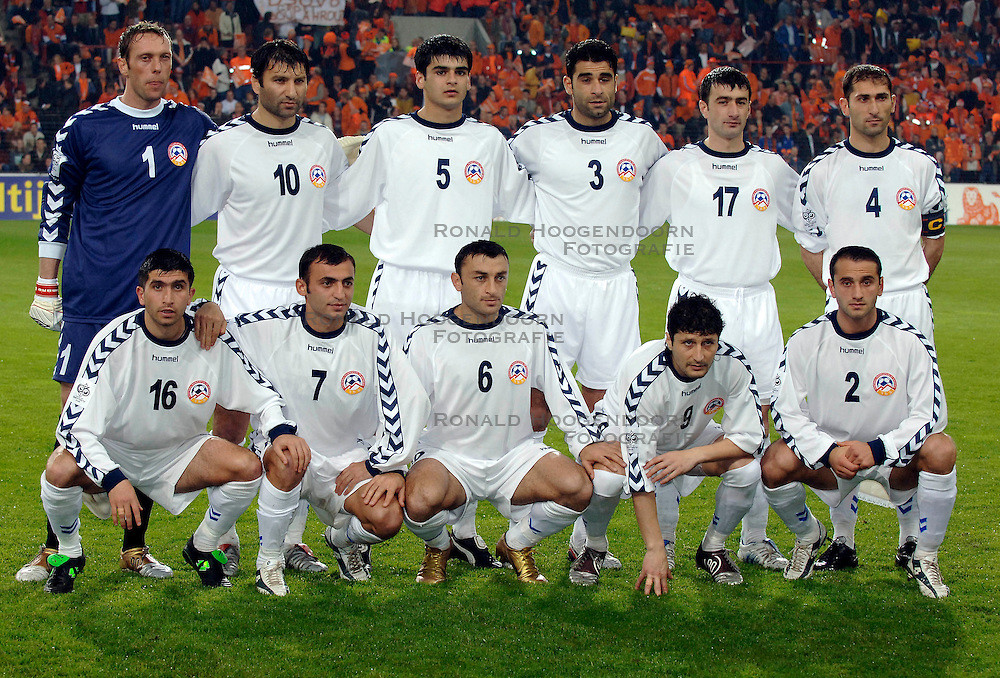 13. Yeghishe Melikyan made his debut in the Armenian national team on October 16, 2002, in the Euro-2004 qualifying round in Athens, in a match against the future champion of Europe, Greece (0:2), entering the pitch on the 81st minute. He was first invited to the national team by the former head coach of our team, Argentinian Oscar Lopez.

In total, Yeghishe Melikyan played 30 matches for the Armenian national team where he stood out with two goal assists. 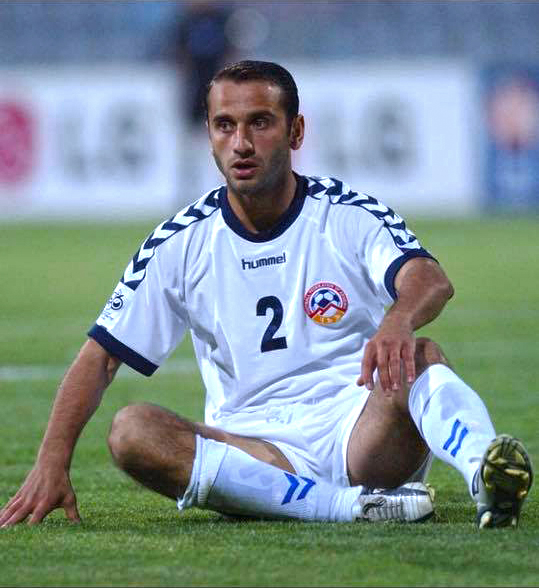 He last played for the Armenian national team on September 12, 2007, in a friendly match against Malta.

14. At the beginning of 2013, Yeghishe Melikyan finished his football career, after which he started coaching the Metalurh Donetsk U18 team. In 2015, he worked with the Metalurh U19 and U21 teams. The next club Melikyan coached was Stal Kamensk, where he led the Stal U19 and U21 teams, then before the start of the 2017/18  season he assumed the helm of the head coach of Stal Kamensk . In the 2019/20 season Melikyan became the head coach of Lviv, playing in the Ukrainian Premier League, where before it he had worked as an assistant coach. In the summer of 2020 he returned to Armenia and headed Alashkert Yerevan.

According to the results of 2020, Yeghishe Melikyan was included in the list of 6 candidates for the the best coach of Armenia nomination. 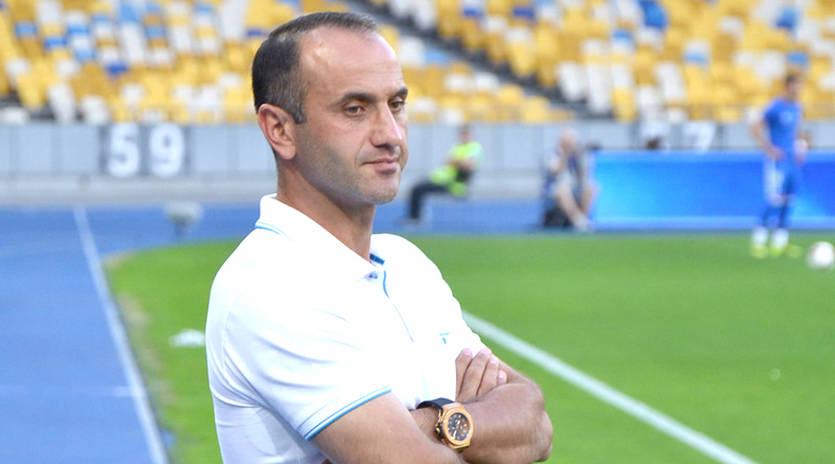 15. Melikyan has a UEFA PRO coaching license. He coordinated the PRO license courses organized by the Football Federation of Ukraine.